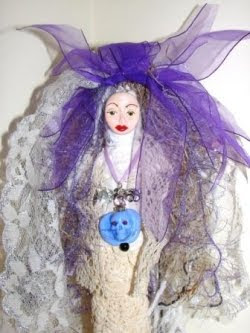 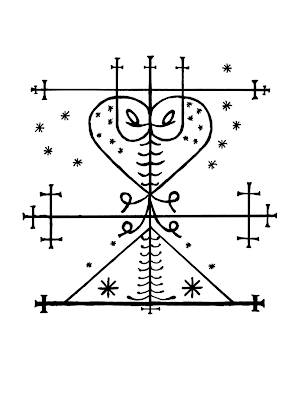 Now we come to the appearance of some of the aspects of Vodou that may appear so much more frightening ... for here we have Manman Brigit,

"Ma'man Brigit (Grann Brigitte, Manman, Manman Brigit, Manman Brijit) is the mother of cemeteries, the loa of money and death, and the wife of Baron Samedi. She may be related to the "triple" Celtic goddess of poetry, smithcraft, and healing, Brigid/St. Brigit, as her name is Irish in origin. She is usually depicted as a white woman. The first woman's grave in a cemetery in Haiti is dedicated to her. Her colors are black, purple and white, her number is nine, and her particular days of service include Monday and Saturday. Her sacrificial animal is a black chicken. She drinks rum laced with hot peppers - "gaz lakrimojen Ayisyen" (Haitian tear gas), and like her husband and the rest of the Guede Spirits, she is a "potty mouth" and uses profanity. Ma'man Brigit will protect gravestones if they are marked properly with a cross. Ma'man Brigit is known to rub her private parts with hot peppers, and those who appear to be faking possession by her in a Vodou ceremony may be subjected to this test, which they obviously would not pass if their possession is not genuine. She is a very sexual dancer, and her legacy is the banda dance.

A very powerful Lwa, Manman Brigit rules the Ghede and transitions of life and death, major life changes, cemeteries, money and children. Ma'man Brigit is invoked to cure those who are near death as a result of magick. She is known to be very wise, and swift to respond to petitions for help!*


How she, or the Irish, got to Haiti, is still a mystery, traveling perhaps through the holds of the slave ships where the Irish, as well as Africans were sold into slavery.

It is not difficult to understand why the slaves were so attached to death and the promise of life beyond the grave which would release them from the torture of their present day misery. Many times they tried to escape bondage on the ships to throw themselves into the ocean on the crossing to escape their fate.

Haiti is the first nation which released them from this bondage.


Are you following this story, classmates, on how the Irish came to Haiti?

Because I think that is going to be a really whopping good Celtic tale of liberation with lots of drumming and ale and a rollicking good time.

Could I have a show of hands, please?
Posted by Elizabeth Eames Roebling at 5:17 AM 2 comments: 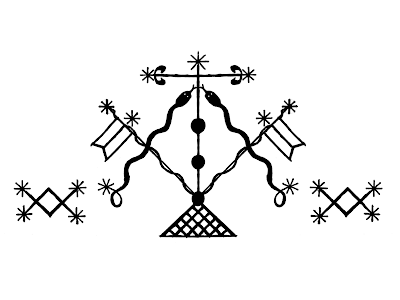 Since my blog post on the missionaries in Haiti has been getting a lot of hits recently, I take it as a sign that there is an interest from some Christians in understanding the way that Spirit is speaking in Kreyole. It is said that in Haiti, 80% of the population is Catholic, 20% of the population is Protestant but everyone believes in Vodou.
from the Wiki--

In Vodou, Damballa is one of the most important of all the loa. He is both a member of the Rada family and a root, or racine Loa. He is depicted as a serpent and is closely associated with snakes. He is considered the father of all the rest of the loa and, along with his wife/companion Ayida Wedo, to be the Loa of creation.

Some of his ritual songs indicate that he "carries the ancestors" on his back to Ginen (spiritual home of the Loa, and the afterlife) His wife is the rainbow serpent Ayida Weddo (he is also married to Erzulie Freda). As a loa of the Rada nation he is associated with the color white. His particular color is white. His offerings are very simple and he prefers an egg on a mound of flour. Some houses also serve him with anisette and corn syrup. When he presents himself in possession, he does not talk, but makes hissing noises like a snake.

In most houses, he is syncretised with the Catholic figures of either Moses or St. Patrick.

Becoming more of a Cynic

There is a heartwarming.. really quite breathtaking story here of a group of 260 Irish volunteers who came down to work in the dust and dreariness of the border town of Ouanminthe to build 200 homes for.. well... 200 families of the perhaps 60/80,000 people who live there.

In order to do this, they had to pay their own way, and sleep on the construction site, the way the Haitian construction workers here sleep inside the building lots of the high rises in Santo Domingo, or the resort hotels. Each volunteer had to raise $5,000 which is no small piece of change.. and amounts to a total of $1,300,000.. bringing the cost per home.. with land to $6,500, which is certainly modest in anyone's book.

So who could object to this act of generosity?

Let me be the first to cast the stone... forgive me, for I am certainly not without sin... it reminds me of the time an old high school friend and I met after college and she asked "do you ever find yourself having a not so liberal thought?"

If you read the article, you will see that first, of course, this is Digicell, which is the number one provider of cell phones in Haiti, so there is a publicity aspect to be gained here. Now they have done a great job of providing phones in Haiti. Prior to their arrival the phone service was abysmal. The Irish guys are a living legend in Haiti because they came down and camped out! No one does that. All the foreigners always stay at the best hotels. Now there are cell phone towers all around Haiti and communication is vastly improved. It has been an enormous service to the country. As long as a person can charge their phone. But electricity is very scare in Haiti.

And what they have not done so far is gotten charging stations in the country side.

So what would have been a really great project, for instance, would have been to take that 1.3 million, put it into a micro finance loan fund for folks to get solar panels which can charge the cell phones, as I saw one industrious young teacher had done. The panel could charge ten phones at a time. From the proceeds, he had paid back his loan, paid his cousin a salary, and paid his uncle for the rent on the little mud and wattle house.........Then the recipients would have had an ongoing source of income and enough money to build their own homes.


I would suggest the radical notion that the mud and wattle construction with the thatched roof which can be seen in parts of Haiti and in Africa is fa superior to the baking heat of concrete blocks with the tin roofs that pass as modern. Give me mud and wattle!!! Just work on a good protective varnish to shield it from the rain. Pine trees yield a very good varnish.

The idea that concrete construction is somehow better housing because it is more modern is just cultural bias and comes from some very good marketing from the part of the concrete industry. I stood next to one prominent Haitian from a large diaspora group and had this same argument over this very house. "But it will come down in a hurricane" He said. "I bet it is over fifty years old, ask them" "Who built it?" "My grandfather's father"

But then, of course, those 260 Irish folks would not have had the soul scrubbing experience of living like the poor which had to be life altering. Even an hour in Ouanaminthe is life altering.

They do a lot of this type of tourism here in the DR. Most of the groups charge about $1000 per person per week to have you go up and build a school or a house or something for the poor. We joke that the poor are sitting under a palm tree playing dominoes and drinking beer while you are doing it. It has led to what we refer to here in the DR as the "da me" culture, the "give me" something.... oh, you poor child who is somehow less than because you are poor, let me the rich white foreigner just give you something. here is a peso, here is a book, here is a xxxxxxxxx. Now the streets of both Santo Domingo and Santiago are filling up with young Haitian children sent to beg. Many of them are trafficked just for that purpose.

What lesson does that teach?

Note also in the article that they could not even get the government of Haiti to build an access road. Nor could they evidently get the town of Ouanaminthe to lobby to get an access road. Most likely because they were giving the homes not to the Most deserving, but to the least.

I suggest that they watch a few episodes of the US program of Extreme Makeover where the families are chosen because they are the most deserving, not for their neediness, but for the greatness of their generosity. By the choice of the recipients, the Haven could muster the community heart, their wish to honor their own community leaders, and then the community will see to it that the access road is built and take pride in their community accomplishment.

Now I applaud this effort. And I do not in any way want to discourage this form of radical generosity.. this amazing and impressive hands on effort. Because it really is very, very impressive. And I tip my Obama baseball cap to each and every one of you.

Clearly that does not work,has not worked, and only teaches people to be better beggars.

So I weep a bit when I read that this doctor was in Ouanaminthe, where the Red Cross Clinic has no supplies and no doctor, and chose to build a concrete house rather than teach first aid.
Posted by Elizabeth Eames Roebling at 5:47 PM No comments:

The Falling Down of Haiti, Again

It is a sad time for Haiti. The Prime Minister, who in her year-long tenure had garnered the respect and admiration of the international community, was replaced by the vote of small group of Senators,themselves of the President's own party.

Those of us who have watched Haiti with hope in our hearts for the last five years are dismayed and discouraged by this act of the dismissal of an extremely competent public servant by those who are apparently less than that. Those who would lay the blame for all of Haiti's troubles on the external world need only look to this dismissal of Prime Minister Pierre-Louis to more accurately pinpoint the source of Haiti's problems.

I defer to the well crafted words of one of the best observers of Haiti, Michael Deibert, who writes on the subject,here.
Posted by Elizabeth Eames Roebling at 5:18 PM No comments:

Elizabeth Eames Roebling
Santo Domingo, District National, Dominican Republic
Born and raised in Greenwich Village and educated by the Quakers - which perhaps accounts for it. I have an ongoing concern with the wounds of slavery. I am an unreformed and unrepentant idealist, believing that life, indeed, could be better if we put our minds, spirits, shoulders and backs into it.