STARTING at SUNDOWN on SUNDAY< OCTOBER, First, 2011, a group of Haitian workers who are now in Las Terrenas, Dominican Republic, will formally launch their campaign to return to Haiti.

The group, which now numbers 158, has been meeting for two months now and is in the process of selecting their top team of 35 builders. These men, who are skilled in all phases of home construction, have worked under the finest engineers from all over the world and has made Las Terreanas the premier tourist destination in the Dominican Republic.

Since the bulk of the work there is completed,the workers understand that further work will be difficult to find. However, having worked under Dominican supervisors and engineers and being fluent in Spanish, they do not wish the knowledge that they have gained here to be lost to their nation.

They habe organized themselves into a HAITI CAPABLE CORPS and are asking that all international projects that are using Dominican builders, contact them through this blog.

We will be contacting the Dominican government directly

party on the beach
in front of casa blanca
sunday
sundown

potato
Posted by Elizabeth Eames Roebling at 1:50 PM No comments:

Labels: Crhistopher Dodd, haiti cabla corp, President Fernandez
There is a grave concern here in the DR about the rise in random, violent crime.

Back in the days of Aristide, the Cartels were running all the cocaine that came through the Carribbean, estimated at about 15% of the US and European market, through Haiti. When MINUSTAH came into Haiti, by mid term of Preval in 2008, prehaps, the nests of dealers had been cleared up. Now the product moves through the DR.

While the DR bought planes to intercept flights, much of the product is still dropped at sea and picked up by fishermen off the south coast. It is a fairly simple matter to find out who is in charge of the ring, as I was able to uncover it a couple of weekends.

However, the Dominicans have been in charge of the distribution of cocaine in NYC .. from NYC to Canada since the early 80s, since LALO from Santiago first discovered how to cut it into CRACK. Since that time, the Dominicans have distributed the cocaine but more importantly, they have laundered the money from this trade.

Twenty years ago, it was estimated that the profits from the sale of cocaine from the Columbia cartels was equal to annual US defense budget.

Since the demand for this product is inside the US and Europe, there is no way to stop this commerce.

It should be remembered that this is a TRADE WAR,

There are three extremely potent NATURAL medicines... coca, marijuana (hahish), and opium (morphine) .. nothing that the pharmaceutical companies have been able to manufacture and patent has ever come close to mimic the psychological and phsical effects of these drugs.

It is said, and I believe it to be true, that Coca Cola, which once contained Cocaine, still imports the coca leaves in their pure form for its secret formula. Here in the DR .. we still drink the orginal formula COCA COLA which is made with pure cane sugar, not the corn syrup.. and there is no contest between the effect of coca cola and pepsi. It is not just caffeine and sugar. There is something else.

This the global NORTH against the GLOBAL SOUTH.. because, if the money from the drug wars were to be acutally legalized and taxed, the color of the skin of the world's bankers would change from white to brown. Afghani, Bolivian, Jamaican....

However, the soft way out of this is simply to pull back the enforcement on any sort of criminial penalties on marijuana, which President Obama has already done. President Fernandez should follow his lead.

The plant, Cannabis Satvis, is native to this island. It was here before Columbus. There is a drawer in the medicine chest at the Museo de las Casas Reales which has it written on it.

Then President Fernadez should go after those who are opening up their product in the streets of the Dominican Republic.

This is a small island, heavily dependent on tourism. It cannot exist if there is an outbreak of crack induced violence.

A crack addict will sell his mother for a fix.

The Catholic Church and the drug educators here know nothing about drugs. They lump marijuana and crack into the same category as "the dark side " There are no good treat ment programs for crack.

The money laundering will and should continue. It is what will prevent this island from sinking into the sea. It will provide a safe haven from the impending crash that may come when the traders realize that they they are mostly crooks and decide to stop dealing with one another.

However, this Island, the FIRST ISLAND in the Western Hermisphere, can be a model for how we are to proceed into the next century.

Let us be clear.

Marijuana is a medicine.

Coca is a medicine.

Opium is a medicine.

Morphine is a medicine.

COCAINE IS A DRUG

CRACK IS A POISON

I trust the Senator Dodd is reading
Posted by Elizabeth Eames Roebling at 10:59 AM 1 comment:

preparing for the Witch's Sabbath.. my favorite Holy Day


I now have
A clothes washing machin
American
Whilopool 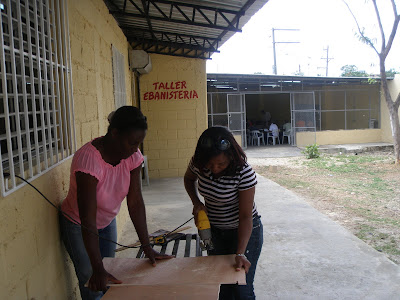 The women who complete full training in the Ce-Mujer programme can expect to earn two or three times the minimum wage.

SANTO DOMINGO, Sep 18, 2011 (IPS) - From a small office inside a public school on the eastern side of the Rio Ozama in the capital Santo Domingo, a programme operated by a local NGO, Ce-Mujer, has been leading a quiet revolution to empower women in the workplace for the last 13 years.

After an initial three years of pilot programmes, the Programme for Technical Training and Jobs for Women has trained over 6,000 women in non-traditional jobs such as furniture making, upholstery, small appliance repair, and the installation and repair of power invertors - all areas for which there is great demand in the labour market and in which there are few women working.

While the government donates the space for the office and classrooms, as well as the services of the teachers, Ce-Mujer provides the administrative staff and the direct contact with the students.

"Our work is probably equally divided between teaching them a skill and building their self-esteem and their motivation so that they can once again discover their aspirations and their dreams. We believe that work has no sex," Nelly Charles, the project director, told IPS.

There is no tuition charge, but the students must pay for transport and for a wardrobe which may be different than the one they wear at home. Since many of them are mothers and grandmothers who have to care for young children, Ce-Mujer provides a child care facility close by. While it is subsidised, it still costs 25 dollars a month. Yet it is one of very few such centres available in the Dominican Republic and so makes the classes more accessible.

The programme is aimed at very poor women. The average age of participants is 35, and the courses are two months long. While some students only take one, many will study for two years and become fully qualified in a given area. Then, Ce-Mujer works to find them jobs.

"While there are many businesses with women who are very responsible and very organised, it is also true that there are others who see a woman and expect her to clean the bathrooms," Charles said. "We present them with women who are qualified, who can really do the work, and they have to change their minds."

Charles speaks with an angry edge in her voice when discussing the unequal investment made in the technical training of women.

"We have technical schools here, big ones, where the administration alone employs 30 people, and you will see that both teachers and students are totally segregated by sex. The women will learn hairdressing, acrylic nails, flower arranging, cake making. And the men? The men learn residential electricity, furniture making, carpentry, automotive mechanics, electronics," she said.

"And they will invest five million pesos for a mechanics workshop and only 50,000 pesos for a beauty shop. And in that one there are 100 percent women."

According to the figures from the Centro del Investigation para Accion Feminina (CEPAF), 62 percent of the university graduates in the Dominican Republic are now women. But this does not always translate into jobs.

At 25 percent, the unemployment rate for women is three times higher than that for men. In addition, 40 percent of households are headed by single women. There also is a gender gap inside of the university, with only a small percentage of women studying engineering and only 30 percent engaged in any study of information technology.

The women who complete full training in the Ce-Mujer programme can expect to earn two or three times the minimum wage. Some have even bought houses.

An average of 100 women are qualified every year, but not all of them will actually work in the field.

"Say that 20 or 30 percent of those will decide to work. But those who take jobs turn out to be very permanent workers," Charles said.

In addition to the classrooms, Ce-Mujer also has a store on a corner in the neighbourhood not far away, where students and graduates can sell their pieces on a consignment basis. The shop is filled with the finely upholstered heavy mahogany furniture which is the style here, along with more modern pieces such as clothes hampers and babies' cribs.

Loyda Jerez, 45, started her fourth course last month. "I come to class four hours a day. First I took reupholstering, then furniture refinishing and now cabinetry. Now I say I am an interior decorator," she told IPS.

Jerez has three children at home, ranging from 13 to 19 years old. She first came to class just to save herself some money.

"Every time that I went to have my furniture repaired, it was very expensive. Now I see that I can do it myself and I really enjoy the work. This is my last course. Now I am going to have to go out and look for money," she said.

Jerez appeared downcast for a moment, but immediately regained her enthusiasm. "A friend and I are thinking of starting a little business together," she said.

Charles added that, "What we are doing is subversive and revolutionary, and we have made real advances. This is a novel idea in this country. We have to teach the women who sometimes say that they cannot do this because the men cannot cook, or the men cannot do the dishes.

"But we have shown that if they are given the chance, we have shown that women can do anything. Because we have many women now who are furniture makers, and upholsterers, and who do it with joy, and with a sense of responsibility equal to that of men."

(END)
Posted by Elizabeth Eames Roebling at 12:31 PM No comments:

Elizabeth Eames Roebling
Santo Domingo, District National, Dominican Republic
Born and raised in Greenwich Village and educated by the Quakers - which perhaps accounts for it. I have an ongoing concern with the wounds of slavery. I am an unreformed and unrepentant idealist, believing that life, indeed, could be better if we put our minds, spirits, shoulders and backs into it.